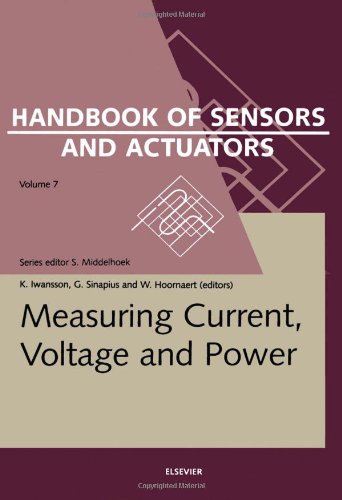 This authoritative new book focuses on recent developments in the instrumentation for sending voltages and currents. It covers new trends and challenges in the field, such as measurements of biocurrents, the increased speed of the components for data taking, and testing of computers, and integrated circuits where the measurement of rapid voltage and current variations on a microscopic geometrical scale is necessary. The first chapter concentrates on recent methods to sense voltages and currents, while the rest of the book investigates the applied side, covering, for instance, electrical power and energy measurements. The main purpose of this volume is to illustrate commonly employed techniques rather than track the scientific evolution and merits and, therefore, mainly covers patent literature aimed at industrial applications. It is an exciting addition, justifying the series’ claim to cover state-of-the-art developments in both the applied and theoretical fields of sensors and actuators.

The measurement of voltages and currents is a common task in the field of electricity and electronics. From a technical point of view, it is useful to identify schematically different steps of such a measurement. In the first step a voltage or a current is sensed, and intermediate steps such as amplification, transmission, and further treatment may follow to yield the result in the final step. Today in most cases, microprocessors perform the final steps of such measurements. Analog-to-digital converters digitize a voltage that is proportional to the value to be measured and a processor performs further computations and handles the storage and the display of the results. The prerequisite for such measurements is sensors or transducers that respond in a known way to the voltage or current to be measured. The emphasis of this book is put on recent developments in instrumentation for sensing voltages and currents.

Aside from the general trend towards smaller, cheaper, and more reliable instrumentation, new demands have arisen. New applications, like measurements of biocurrents, ask for higher sensitivities. Computers and integrated circuits pose new challenges. To exploit the increased speed of the components for data taking, suitable sensors are required. The accuracy that can be achieved depends more than ever on the first step, the acquisition of the raw data. The influence of the measurement process on the results becomes more crucial. Testing integrated circuits themselves is a completely new application. For such tests, one has to measure rapid voltage and current variations on very small geometrical scales. Here, as well as in traditional high-voltage applications, contactless measurements play an important role.

The organization of this book is as follows: In the first chapter different methods to sense voltages and currents are described. For the sake of completeness most commonly used methods are mentioned; we concentrate, however, on those developed recently. The chapters address the subject from the side of different applications in which voltages and currents are sensed.

Since the primary purpose of this publication is to illustrate commonly employed techniques rather than to track the scientific evolution and merits in particular fields, in general, those publications that illustrate a specific principle of measurement best have been cited. The citation of a particular reference does, therefore not imply that this is the first or most pertinent publication in the respective field.

Series: Handbook of Sensors and Actuators