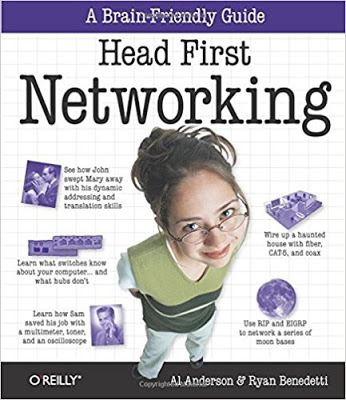 Frustrated with networking books so chock-full of acronyms that your brain goes into sleep mode? Head First Networking’s unique, visually rich format provides a task-based approach to computer networking that makes it easy to get your brain engaged. You’ll learn the concepts by tying them to on-the-job tasks, blending practice and theory in a way that only Head First can.
you will learn :
Master the functionality, protocols, and packets that make up real-world networking
Learn networking concepts through examples in the field
Tackle tasks such as planning and diagramming networks, running cables, and configuring network devices such as routers and switches
Monitor networks for performance and problems, and learn troubleshooting techniques
Practice what you’ve learned with nearly one hundred exercises, questions, sample problems, and projects.