Home General Subjects Books Chemistry Books Introduction to Relativistic Quantum Chemistry by Kenneth G. Dyall and Knut...
Introduction to Relativistic Quantum Chemistry by Kenneth G. Dyall and Knut Fægri, Jr. : The emergence of relativistic quantum chemistry has been one of the more remarkable developments within computational chemistry over the past decades. Since the early work of Dirac, relativity has always been a part of the overall quantum chemical picture, but it has mostly been neglected on the grounds that the effects were considered small and the methods to treat them were poorly developed and expensive to use. However, as nonrelativistic quantum chemistry became more powerful and accurate, the lower rows of the periodic system came within reach of computational studies, and it became clear that relativistic effects had a significant influence on a number of physical and
chemical properties. The start of the “modern” era of relativistic quantum chemistry
may be traced back to a review article by Pyykkö (1978) and to articles by Pitzer
(1979) and by Pyykkö and Desclaux (1979).The developments in the field have been well documented through articles in scientific journals, conferences and symposia, and review volumes. Unfortunately, this specialist literature is not easily accessible to newcomers to the field. For many years the book by Moss, Advanced Molecular Quantum Mechanics (1973), served as an introduction to the field, but today this book suffers from two major drawbacks—it is out of print and it does not cover the developments of the past three decades. We therefore decided that there was a need for a book to fill the gap between the standard texts on quantum mechanics, which have little if anything on relativity, the advanced texts, which treat relativity in detail but have little connection with quantum chemistry, and the literature, where there is a large amount of both theory and applications.
Our ambition is to provide a modern introduction to the field of relativistic quantum
chemistry, aimed at the advanced student and the practicing nonspecialist researcher.
The material has been divided into five parts. Parts I and II provide the necessary
background from classical physics, relativistic quantum mechanics, and group theory.
Part III covers the application of these principles to fully relativistic methods for
quantum chemistry within a four-component framework. Part IV deals with the main approximate methods that have been developed, and Part V treats the consequences of
relativity for chemical bonding.
The book is introductory in the sense that it introduces many of the concepts needed
for a firm background in relativistic theory and quantum chemistry but without going
into all the details. References are given to fuller treatments of the introductory material.
Our intention is not to give all the details of proofs that can be found in other standard
works on relativistic quantum mechanics, but rather to present the relevant parts for
the purpose of constructing a relativistic quantum chemistry. It is also introductory in
the sense that the details of many of the methods that are found in the literature are
reproduced or elaborated in this book, so that the educated quantum chemist does not
have to search through the literature for them. Finally, it is introductory in the sense
that it contains descriptive material to do with relativistic effects on bonding, structure,
and energetics of molecules. We have no ambitions of providing an extensive review
of what has become a large and quite heterogeneous field, nor of providing a historical
overview of the development of relativistic methods. The specialist will probably have
no difficulty identifying one or more “pet subjects” or “key references” that are missing.
We do provide a guide to the review literature in the field, and also in this respect the
work is introductory. 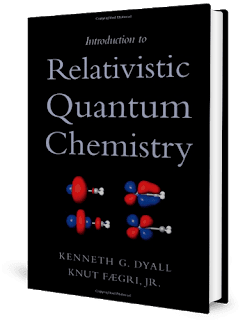 This book provides an introduction to the essentials of relativistic effects in quantum chemistry, and a reference work that collects all the major developments in this field. It is designed for the graduate student and the computational chemist with a good background in nonrelativistic theory. In addition to explaining the necessary theory in detail, at a level that the non-expert and the student should readily be able to follow, the book discusses the implementation of the theory and practicalities of its use in calculations. After a brief introduction to classical relativity and electromagnetism, the Dirac equation is presented, and its symmetry, atomic solutions, and interpretation are explored. Four-component molecular methods are then developed: self-consistent field theory and the use of basis sets, double-group and time-reversal symmetry, correlation methods, molecular properties, and an overview of relativistic density functional theory. The emphases in this section are on the basics of relativistic theory and how relativistic theory differs from nonrelativistic theory. Approximate methods are treated next, starting with spin separation in the Dirac equation, and proceeding to the Foldy-Wouthuysen, Douglas-Kroll, and related transformations, Breit-Pauli and direct perturbation theory, regular approximations, matrix approximations, and pseudopotential and model potential methods. For each of these approximations, one-electron operators and many-electron methods are developed, spin-free and spin-orbit operators are presented, and the calculation of electric and magnetic properties is discussed. The treatment of spin-orbit effects with correlation rounds off the presentationof approximate methods. The book concludes with a discussion of the qualitative changes in the picture of structure and bonding that arise from the inclusion of relativity.