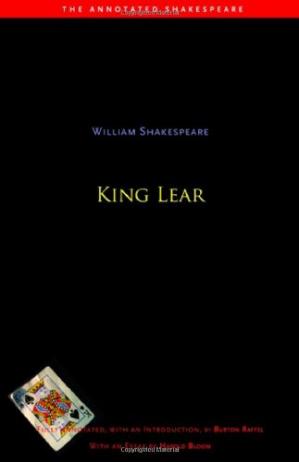 King Lear is a tragedy written by William Shakespeare. There are two versions, but modern editors usually conflate these to produce a single play. Both versions are based on the mythological Leir of Britain. King Lear relinquishes his power and land to two of his daughters.

Of the five major Shakespearean tragedies-Hamlet, Macbeth, Romeo and Juliet, King Lear, and Othello-King Lear is perhaps the most challenging. Issues of rulership, family and blood, are overlaid with bastardy, loyalty, lust, and deceit. Add to this the apparently gratuitous on-stage blinding of Gloucester, the deaths of Cordelia, Lear, Gloucester, and Kent, and one might be inclined to agree with Samuel Johnson that “The good suffer more than the evil, that love and suffering, in this play, are almost interchangeable terms and the driving force of the action is derived from the power of the evil to inflict mental agony upon the good” (quoted in Kermode, 505).

However, one would be mistaken to accept wholeheartedly the happy endings of the eighteenth and nineteenth century revisionists. While the pleasant ending would certainly ease the sensibilities of the audience, it would omit the Aristotlean concepts of hamartia and the purgation of fear and pity attendant upon actually witnessing Shakespeare’s King Lear, the necessary catharsis, a possible scapegoat for our own emotions. Of course, the ending is to some extent unpleasant and even shocking; however, one can argue that the ending is organic to the play; the ending IS, to a great extent, the play.