Home A Special Books Lelouch of the Rebellion 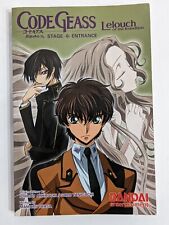 The novel adaptation of the hit anime series is seen on Adult Swim! In the year 2010, the Holy Empire of Brittania declared war on Japan. Powerless to stop them, Japan surrendered in less than a month. Freedom was lost, and Japan was renamed “Area 11,” and its people became known as “Elevens.” Lelouch is a Brittanian, and his friend Suzaku, born at eleven, has achieved the status of honorary Brittanian. As a boy, Lelouch vowed to crush his own government, but now seven years later and in high school, he’s accepted that he can’t change anything. That is until he meets a mysterious girl that gives him the power to control people’s minds – the power of Geass! He dons a mask and becomes the ruthless terrorist known only as Zero, destroying any who might stand in his path – including his boyhood friend Suzaku!