Home Chemistry Books Analytical Chemistry Manipulation and Characterization of Electrosprayed Ions Under Ambient Conditions – Methods...
Manipulation and Characterization of Electrosprayed Ions Under Ambient Conditions – Methods and Instrumentation by Zane Baird Content: 1.2 Electrospray Ionization: The observation of liquid atomization and deformation in the presence of a strong electric field dates back several centuries, the underlying theory of which was first described by Lord Rayleigh as early as 1882 [14]. It would be more than 30 years before work was undertaken by John Zeleny to gain a better understanding of this phenomenon and take the first photographs of different “modes” of electrospray from small cylindrical emitters [15, 16]. Nearly 40 years after Zeleny’s observations, Sir. Geoffrey Ingram Taylor developed a theoretical model of the shape a deformed liquid meniscus assumes at the end of a capillary in the presence of an electric field, now known as a “Taylor cone” [17]. These studies laid the foundation for electrospray ionization (ESI), which would later prove to be an invaluable tool spanning many disciplines. Around the same time Taylor was developing underlying theories of electrospray generation, Dole et al. [18, 19] showed that beams of fairly large (51–411 kDa) polystyrene ions could be generated by sampling an electrosprayed solution into vacuum. While not able to measure m/z of the ions directly, with a thorough understanding of ion-neutral interaction forces and by adjusting the potential of acharged repeller grid, they were able to verify the formation of a beam of “macroions” rather than low molecular-weight species [18], a fact confirmed by later experiments for the analysis of electrophoretic mobilities of the electrosprayed solutions [20].
Download to Read More…. 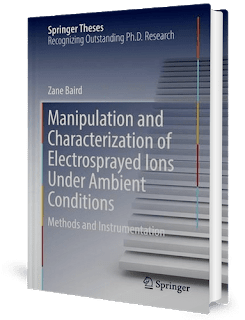 This thesis addresses the evolving field of measurement science, specifically that of mass spectrometry (MS) and ion mobility spectrometry (IMS) based techniques. It focuses on the design, construction and implementation of low-cost, easy-to-manufacture measurement tools that are used in modern settings such as airport security screening.
Advances in these technologies often involve minimal performance enhancement at ever-increasing cost, which in turn limits accessibility to versatile measurement tools. This problem is addressed using desktop 3D printers along with widely available materials for the production of novel ion lenses and an IMS instrument with a performance comparable to that of many commercial systems.
Baird´s findings are a source of inspiration for scientists exploring this emerging field.

Manipulation and Characterization of Electrosprayed Ions Under Ambient Conditions: Methods and Instrumentation