Marine Biotechnology in the 21st Century : Dramatic developments in understanding the fundamental underpinnings of life have provided exciting opportunities to make marine bioproducts an important part of the U.S. economy. Several marine based pharmaceuticals are under active commercial development, ecosystem health is high on the public’s list of concerns, and aquaculture is providing an ever greater proportion of the seafood on our tables. Nevertheless, marine biotechnology has not yet caught the public’s, or investor’s, attention. Two workshops, held in October 1999 and November 2001 at the National Academies, were successful in highlighting new developments and opportunities in environmental and biomedical applications of marine biotechnology, and also in identifying factors that are impeding commercial exploitation of these products. This report includes a synthesis of the 2001 sessions addressing drug discovery and development, applications of genomics and proteomics to marine biotechnology, biomaterials and bioengineering, and public policy and essays contributed by the workshop speakers. 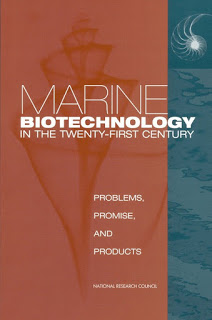 Marine Biotechnology in the 21st Century – Nrc Table Of Contents