Multiconfigurational Quantum Chemistry by Roos, Lindh and Widmark :: The intention of this book is to introduce the reader into the multiconfigurational approaches in quantum chemistry. Thesemethods aremore difficult to learn to use and there does not exist any textbook in the field that takes the students from the simple Hartree–Fock method to the advanced multireference methods such as multireference configuration interaction (MRCI), or the complete active space self-consistent field (CASSCF) method. The intention is to describe these and other wave function-based methods such that the treatment can be followed by any student with basic knowledge in quantum mechanics and quantum chemistry. Using many illustrative examples, we shall show how these methods can be applied in various areas of chemistry, such as chemical reactions in ground and excited states, transition metal, and other heavy element systems. These methods are based on a well-defined wave function with exact spin and symmetry and are therefore well suited for detailed analysis of various bonding situations. A simple example is the oxygen molecule, which has a 3Σ−g ground state. Already this label tells us much about the wave function and the electronic structure. It is a triplet state (S = 1), it is symmetric around the molecular axis (Σ), it is a gerade function, and it is antisymmetric with respect to a mirror plane through the molecular axis. None of these properties are well defined in some methods widely used today. It becomes even worse for the first excited state, 1Δg, which cannot be properly described with single configurational methods due to its multiconfigurational character. This failure can have severe consequences in studies of oxygen-containing biological systems. It is true that these wave function-based methods cannot yet be applied to as large systems as can, for example, density functional theory (DFT), but the method development is fast and increases the possibilities for every year. 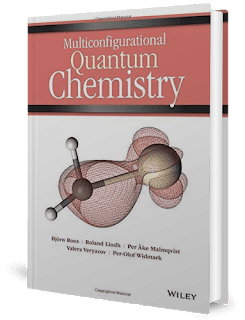