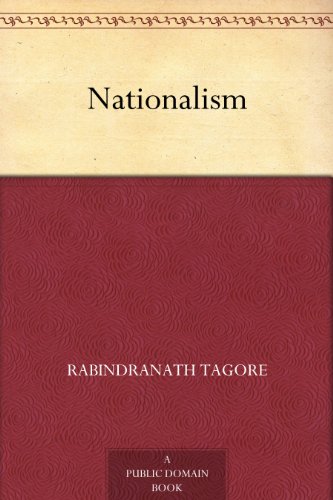 Nationalism is book of A compendium of lectures delivered by Tagore during the First World War and the Swadeshi movement in India and their political and philosophical views on human understanding and its weakness for power and material hoardings by Rabindranath Tagore, published in 1917.

Man’s history is being shaped according to the difficulties it encounters. These have offered us problems and claimed their solutions from us, the penalty of non-fulfilment being death or degradation. These difficulties have been different in different peoples of the earth, and in the manner of our overcoming them lies our distinction. The Scythians of the earlier period of Asiatic history had to struggle with the scarcity of their natural resources. The easiest solution that they could think of was to organize their whole population, men, women, and children, into bands of robbers. And they were irresistible to those who were chiefly engaged in the constructive work of social co-operation. But fortunately for man the easiest path is not his truest path. If his nature were not as complex as it is, if it were as simple as that of a pack of hungry wolves, then, by this time, those hordes of marauders would have overrun the whole earth. But man, when confronted with difficulties, has to acknowledge that he is man, that he has his responsibilities to the higher faculties of his nature, by ignoring which he may achieve success that is immediate, perhaps, but that will become a death-trap to him. For what are obstacles to the lower creatures are opportunities to the higher life of man.To India has been given her problem from the beginning of history it is the race problem. Races ethnologically different have in this country come into close contact. This fact has been and still continues to be the most important one in our history. It is our mission to face it and prove our humanity by dealing with it in the fullest truth. Until we fulfil our mission all other benefits will be denied us…