NMR Quantum Information Processing by Oliveira, Bonagamba, Sarthour :: Quantum Computation and Quantum Information (generally referred as QIP) deals with the identification and use of quantum resources for information processing. This includes three main branches of investigation: quantum algorithm design, quantum simulation and quantum communication, including quantum cryptography. Along the past few years, QIP has become one of the most active areas of research in both theoretical and experimental physics, attracting young students and researchers fascinated, not only by the potential practical applications of quantum computers, but also by the possibility of studying fundamental physics at the deepest level of quantum phenomena. From a practical viewpoint, any experimental technique candidate to implement QIP in large scale, must satisfy the following basic demands: (i) to have a good physical representation for the quantum unit of information: the qubit; (ii) to be able to generate a complete set of universal quantum gates, and (iii) to be applicable to a scalable physical system. Nuclear Magnetic Resonance (NMR) perfectly satisfies the first two demands. Indeed, nuclear spins are nearly ideal qubits, and radiofrequency pulses correctly implement unitary transformations which can easily build a complete set of universal quantum logic gates. Since 1997, after the discovery of the so-called pseudo-pure states, every single quantum algorithm has been demonstrated by the use of liquid-state NMR. In this approach, qubits are represented by nuclear spins in molecules of a liquid. The main advantage of this approach is the straight use in QIP of a highly advanced technique, definitely established in science and technology by more than 50 years of development! However, it has also a main drawback: it is not scalable. That basically means that liquid-state NMR is an excellent technique to study the fundamentals of QIP, but not to build a large-scale quantum computer.

However, this also means that if we want to take the advantages of NMR technology to build large-scale quantum computers, one must develop alternatives to liquid-state samples. And this is quickly developing in different fronts. In one front, techniques of atomby- atom manipulation became a reality which will allow in the near future the construction of solid-state qubit arrays for large-scale QIP. In another front, Magnetic Resonance Force Microscopy (MRFM) has raised as a main breakthrough, capable of increasing NMR sensitivity from the current 1014 to a single spin! This technique can be used to implement the main steps necessary to practical implementation of NMR QIP. 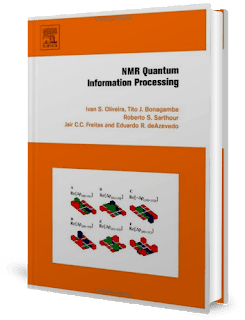