Home General Subjects Books Chemistry Books Organic Chemistry, 10th Edition by Francis Carey and Robert M. Giuliano
Organic Chemistry, 10th Edition by Francis Carey and Robert M. Giuliano :: Overview: The power of X-ray crystallographic analysis was cited in Dorothy Crowfoot Hodgkin’s 1964 Chemistry Nobel Prize Lecture:
A GREAT ADVANTAGE OF X-RAY ANALYSIS AS A METHOD OF CHEMICAL STRUCTURE ANALYSIS IS ITS POWER TO SHOW SOME TOTALLY UNEXPECTED AND SURPRISING STRUCTURE WITH, AT THE SAME TIME, COMPLETE CERTAINTY.
From Linus Pauling’s 1954 Nobel Prize for research on the chemical bond, to Dorothy Crowfoot Hodgkin’s in 1964 for solving the structure of vitamin B12 and other biochemical substances, to Robert Lefkowitz and Brian Kobilka’s in 2012 for solving the structure of G protein-coupled receptors, chemists of all persuasions have shared a common interest in the structure of molecules. It is this common interest in structure that has guided the shaping of this edition. Its most significant change is the relocation of chirality, previously a Chapter 7 topic, to Chapter 4 where it now is closer to the other fundamental structural
concepts such as molecular shape, constitution, and conformation. A broader background in structure, acquired earlier in this new presentation, is designed to provide students the conceptual tools they need to understand and apply the relationship between the structures of organic compounds and their properties. 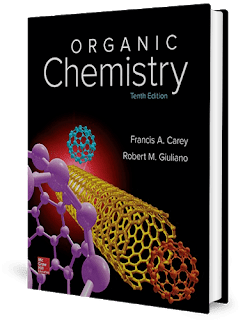