Organic Chemistry – Principles and Mechanisms, 2nd Edition by Joel M. Karty :: Overview: Organic Chemistry and You : You are taking organic chemistry for a reason — you might be pursuing a career in which an understanding of organic chemistry is crucial, or the course might be required for your particular field of study, or both. You might even be taking the course simply out of interest. Regardless of the reason, organic chemistry impacts your life in significant ways. Consider, for example, the growing concern about the increasing resistance of bacteria to antibiotics over the past several decades. Perhaps no germ has caused more alarm than methicillin-resistant Staphylococcus aureus (MRSA), a type of bacteria responsible for staph infections. Methicillin is a member of the penicillin family of antibiotics, and resistance to methicillin in these bacteria was first observed in 1961. Today MRSA, which has been called a superbug, is resistant to most antibiotics, including all penicillinderived antibiotics. A breakthrough in the fight against MRSA occurred in 2006 with the discovery of a compound called platensimycin, isolated from Streptomyces spores. The way that platensimycin targets bacteria is different from that of any other antibiotic in use and, therefore, it is not currently susceptible to bacterial resistance.

Platensimycin is found in a type of South African mushroom, Streptomyces platensis, and was discovered by screening 250,000 natural product extracts for antibacterial activity. Sheo B. Singh (Merck Research Laboratories) and coworkers determined the structure of platensimycin using a technique called nuclear magnetic resonance (NMR) spectroscopy, which we discuss in Chapter 16. Not long after, K. C. Nicolaou and coworkers from the Scripps Research Institute (La Jolla, California) and the University of California, San Diego, were the first to devise a synthesis of platensimycin from other readily available chemicals. The story of platensimycin, from discovery to synthesis, involves several of the subdisciplines that make up the field of organic chemistry.

● Biological chemistry (biochemistry): The study of the behavior of biomolecules and the nature of chemical reactions that occur in living systems.

● Structure determination: The use of established experimental techniques to determine the structure of newly discovered compounds. 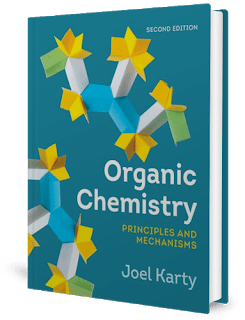