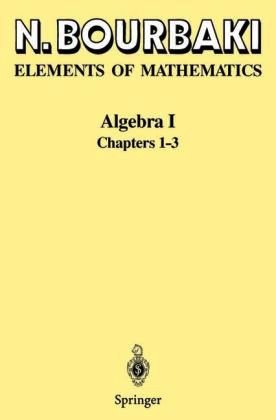 This is the softcover reprint of the English translation of 1974 (available from Springer since 1989) of the first 3 chapters of Bourbaki’s ‘Algebra’. It gives a thorough exposition of the fundamentals of general, linear and multilinear algebra. The first chapter introduces the basic objects: groups, actions, rings, fields. The second chapter studies the properties of modules and linear maps, especially with respect to the tensor product and duality constructions. The third chapter investigates algebras, in particular tensor algebras. Determinants, norms, traces and derivations are also studied.

This is a softcover reprint of the English translation of 1990 of the revised and expanded version of Bourbaki’s textbook, Algebra, Chapters 4 to 7 (1981).

The English translation of the new and expanded version of Bourbaki’s Algebra, Chapters 4 to 7 completes Algebra, 1 to 3, by establishing the theories of commutative fields and modules over a principal ideal domain. Chapter 4 deals with polynomials, rational fractions and power series. A section on symmetric tensors and polynomial mappings between modules, and a final one on symmetric functions, have been added. Chapter 5 has been entirely rewritten. After the basic theory of extensions (prime fields, algebraic, algebraically closed, radical extension), separable algebraic extensions are investigated, giving way to a section on Galois theory. Galois theory is in turn applied to finite fields and abelian extensions. The chapter then proceeds to the study of general non-algebraic extensions which cannot usually be found in textbooks: p-bases, transcendental extensions, separability criterions, regular extensions. Chapter 6 treats ordered groups and fields and based on it is Chapter 7: modules over a p.i.d. studies of torsion modules, free modules, finite type modules, with applications to abelian groups and endomorphisms of vector spaces. Sections on semi-simple endomorphisms and Jordan decomposition have been added.

This is the English translation of Bourbaki’s text Groupes et Algebres de Lie,

Chapters 7 to 9. It completes the previously published translations of Chapters

algebras and their root systems. It goes on to describe the finite-dimensional

modules for such algebras, including the character formula of Hermann Weyl. It

concludes with the theory of Chevalley orders. Chapter 9 is devoted to the

theory of compact Lie groups, beginning with a discussion of their maximal tori,

root systems and Weyl groups. It goes on to describe the representation theory

of compact Lie groups, including the application of integration to establish

Weyl’s formula in this context. The chapter concludes with a discussion of the