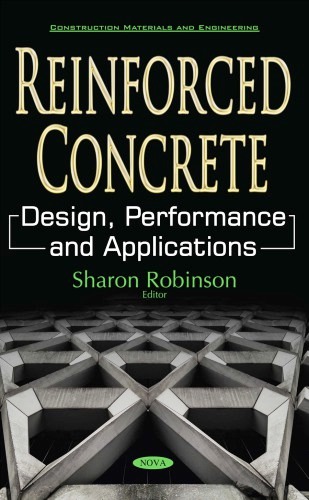 Concrete is one of the most used materials in the construction industry. In structural systems, the combination of concrete and steel reinforcement bars gives rise to reinforced concrete (RC), which is widely applied in the civil engineering field due to its adequate mechanical strength, durability, and fire resistance.

Steel-rebar reinforced structures are subjected to structural deterioration when subjected to extreme loadings such as earthquake, fire, impact loadings, and cyclic loading, consequently reducing the expected life and performance of structures.

To enhance structural performance, the RC structures are usually retrofitted or strengthened. This book reviews design, performance, and applications of reinforced concrete.

Chapter 1 – Fiber-reinforced polymer (FRP) is used extensively nowadays in the construction industry to reinforce and strengthen reinforced concrete (RC) structures to enhance the structural performance of the structures under various loading conditions.

Finite element analysis is an efficient and accurate method for modeling the structural behavior of FRP strengthened RC structures especially under extreme loadings such as cyclic loading.

For accurate numerical modeling of the structural behavior of FRP strengthened RC beams, appropriate material models of each component and bond behavior are essential. In this chapter, the developed materials models for concrete, FRP, steel rebar, and adhesive and the bond stress-slip models for FRP/adhesive/ concrete interfaces are reviewed.

In addition, the developed finite element models for the analysis of FRP strengthened RC beams under static and cyclic load are also reviewed.

The goal of this approach is the description of the processes of mechanical damage and the subsequent implementation in structural analysis programs. In continuum damage models, the damage evaluation is carried out across the entire structural domain, which significantly increases the computational effort.

Alternatively, lumped damage mechanics allows for accurate mechanical modeling of the non-linear behavior of concrete without representing damage over the total structural area.

This theory combines concepts of fracture mechanics with the plastic hinge idea and it can be used accurately in one-dimensional structural elements. In this chapter, this theory is applied to the mechanical analysis of one RC beam and one RC frame.

The results are compared with numerical and experimental responses available in the literature. Good agreement is observed among the results shown in the references and those obtained by the lumped damage model.

Chapter 3 – This study aims the Mecano-probabilistic modeling of reinforced concrete structures subjected to reinforcements’ corrosion. The corrosion time initiation due to the carbonation or the chloride penetration is assessed by diffusion approaches.

The tree of failure is utilized for determining the probability of individual and global failure modes. The structural mechanical resistance is evaluated according to the Brazilian design code NBR 6118/2014.

The penalizations over the reinforcements’ cross-section area and over its yield stress, both caused by the corrosion process, are accounted for.

The loading is modeled by the extreme value process. Probability of failure curves for the corrosion time initiation; mechanical failure and reinforcements’ steel loss along time are presented. In addition to the assessment of the probability of individual failure modes, the progressive collapse paths along 50 years are analyzed.

The results obtained show that relevant changes in the predominant mechanical failure mode occur along time.

Moreover, major values for the reinforcements’ steel loss and the probability of mechanical collapse are observed at the end of 50 years, even accounting for the design code recommendations.

Chapter 4 – Studies concerning atmospheric corrosion of metals have been carried out during many years.

It is possible to reduce the premature deterioration in the structures in conditions of a coastal city located on a tropical island through the evaluation of the corrosion behavior of different types of concrete and covering thicknesses.

The use of reinforced concrete with water-cement ratios 0.5 and 0.6 and covering thicknesses 20 and 40 mm does not assure adequate durability and useful life for structures submitted to corrosivity categories of the atmospheres very high (C5) and extreme (CX) in a coastal-industrial atmosphere.

It is required the use of w/c ratio 0.4 and covers thickness 40 mm to assure adequate durability. Chapter 5 – The reinforced concrete structures must beings able to absorb the forces applied to them throughout their lives and support the alterations over time and the environment to which they are exposed.

In this context, an experimental study was conducted on a public-use building which has structural disorders using non-destructive testing (NDT).

The rebound hammer test, the ultrasonic device, and the chemical test are used in the field of nondestructive tests to determine respectively the compression strength, the ultrasonic pulse velocity (UPV) and the rebar corrosion in the concrete.

Indeed, the test results were analyzed to identify the different disorders in order to offer adequate compensation methods and protection against future attacks. Test results have shown that the concrete exhibits good compressive strength.

The steel was completely corroded as a result of a chemical attack. The method of jacketing has been proposed for the strengthening of building columns.