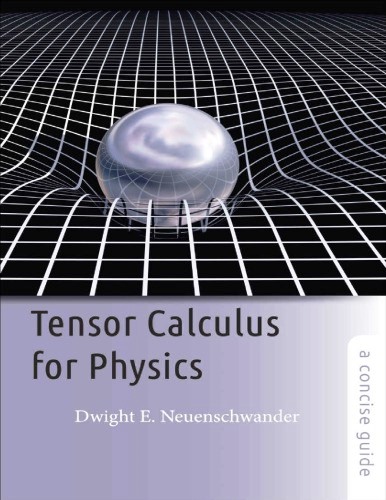 Understanding tensors is essential for any physics student dealing with phenomena where causes and effects have different directions. A horizontal electric field producing vertical polarization in dielectrics; an unbalanced car wheel wobbling in the vertical plane while spinning about a horizontal axis; an electrostatic field on Earth observed to be a magnetic field by orbiting astronauts—these are some situations where physicists employ tensors. But the true beauty of tensors lies in this fact: When coordinates are transformed from one system to another, tensors change according to the same rules as the coordinates. Tensors, therefore, allow for the convenience of coordinates while also transcending them. This makes tensors the gold standard for expressing physical relationships in physics and geometry.

Undergraduate physics majors are typically introduced to tensors in special-case applications. For example, in a classical mechanics course, they meet the “inertia tensor,” and in electricity and magnetism, they encounter the “polarization tensor.” However, this piecemeal approach can set students up for misconceptions when they have to learn about tensors in more advanced physics and mathematics studies (e.g., while enrolled in a graduate-level general relativity course or when studying non-Euclidean geometries in a higher mathematics class).

Dwight E. Neuenschwander’s Tensor Calculus for Physics is a bottom-up approach that emphasizes motivations before providing definitions. Using a clear, step-by-step approach, the book strives to embed the logic of tensors in contexts that demonstrate why that logic is worth pursuing. It is an ideal companion for courses such as mathematical methods of physics, classical mechanics, electricity and magnetism, and relativity.

Preface to Tensor Calculus for Physics A Concise Guide PDF

By the standards of tensor experts, this book will be deemed informal, repetitious, and incomplete. But it was not written for those who are already experts.

It was written for physics majors who are new to tensors and find themselves intrigued but frustrated by them. The typical readers I have in mind are undergraduate physics majors in their junior or senior year.

They have taken or are taking courses in classical mechanics and electricity and magnetism, have become acquainted with special relativity, and feel a growing interest in general relativity.

According to Webster’s Dictionary, the word “concise” means brief and to the point. However, tensor initiates face a problem of so much being left unsaid. Few undergraduates have the opportunity to take a course dedicated to tensors.

We pick up whatever fragments about them we can along the way. Tensor calculus textbooks are typically written in the precise but specialized jargon of mathematicians.

For example, one tensor book “for physicists” opens with a discussion on “the group Gα and affine geometry.” While appropriate as a logical approach serving the initiated, it hardly seems a welcoming invitation for drawing novices into the conversation.

This book aims to make the conversation accessible to tensor novices. An undergraduate who recently met the inertia and electric quadrupole tensors may feel eager to start on general relativity.

However, upon opening some modern texts on the subject, our ambitious student encounters a new barrier in the language of differential forms. Definitions are offered, but to the novice, the motivations that make those definitions worth developing are not apparent.

One feels like having stepped into the middle of a conversation. So one falls back on older works that use “contravariant and covariant” language, even though newer books sometimes call such approaches “old-fashioned.”

Fashionable or not, at least they are compatible with a junior physics major’s background and offer a useful place to start. In this book, we “speak tensors” in the vernacular.

Chapter 1 reviews undergraduate vector calculus and should be familiar to my intended audience; I want to start from common ground. However, some issues taken for granted in familiar vector calculus are the tips of large icebergs.

Chapter 7 re-derives important tensor results through the use of basis vectors. Chapter 8 offers an informal introduction to differential forms, to show why these strange mathematical objects are beautiful and useful.

Jacob Bronowski wrote in Science and Human Values, “The poem or the discovery exists in two moments of vision: the moment of appreciation as much as that of creation. . . .

We enact the creative act, and we ourselves make the discovery again.” I thank the reader for accompanying me as I retrace in these pages the steps of my own journey in coming to terms with tensors.