Home General Subjects Books Chemistry Books Radioactivity – Introduction and History, From the Quantum to Quarks
Radioactivity – Introduction and History, From the Quantum to Quarks, 2nd Edition by Annunziata :: During the preparation of the first edition, published in 2007, I was only able to provide the early history of the development of the science concerning the atom, its nucleus, and nuclear decay up to around 1950. Nevertheless, the book was well received, as evidenced by its appearance in 2008 in the top 10 of the Library Journal’s best sellers list in physics. When Elsevier invited me to prepare an expanded second edition, I relished both the challenge and the opportunity. This gave me the chance to expand the book to the present, and describe the historical developments that have led to our current understanding of the science of the atom, its nucleus, and the nuclear decay that gives rise to radioactivity. I have included in this new second edition a review of our current understanding of the building blocks of matter, the fundamental forces in nature, and the role of quarks and the force particles, ie, gluons, photons,  and Z0 bosons, in nuclear stability and decay. This expansion of the book compelled me to augment its subtitle to include From the Quantum to Quarks, which more accurately reflects its comprehensive content.
Readers familiar with the first edition will notice that I have included more photographs of the pioneers and Nobel Laureates who have contributed in a large way to our current knowledge of nuclear science heeded the requests of readers to do so. Also, I have continued to include throughout the book copies of postage stamps that commemorate the pioneers and the important contributions they made to our current understanding of this fascinating science. The inclusion of commemorative postage stamps of the pioneers highlights the importance of their work and the recognition and celebrity status attributed to them for discoveries that have had an important impact on our daily lives. 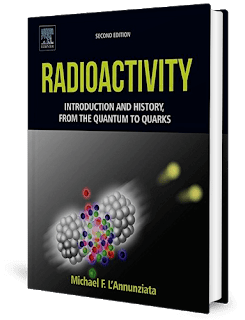 Radioactivity – Introduction and History, From the Quantum to Quarks, 2nd Edition by Annunziata

Radioactivity: Introduction and History, From the Quantum to Quarks, Second Edition provides a greatly expanded overview of radioactivity from natural and artificial sources on earth, radiation of cosmic origins, and an introduction to the atom and its nucleus. The book also includes historical accounts of the lives, works, and major achievements of many famous pioneers and Nobel Laureates from 1895 to the present.

These leaders in the field have contributed to our knowledge of the science of the atom, its nucleus, nuclear decay, and subatomic particles that are part of our current knowledge of the structure of matter, including the role of quarks, leptons, and the bosons (force carriers).

Users will find a completely revised and greatly expanded text that includes all new material that further describes the significant historical events on the topic dating from the 1950s to the present.

Provides a detailed account of nuclear radiation – its origin and properties, the atom, its nucleus, and subatomic particles including quarks, leptons, and force carriers (bosons)
Includes fascinating biographies of the pioneers in the field, including captivating anecdotes and insights
Presents meticulous accounts of experiments and calculations used by pioneers to confirm their findings.

Radioactivity. Introduction and History, from the Quantum to Quarks

[PDF] Radioactivity – Introduction and History, From the Quantum to Quarks Table Of Contents