Home A Special Books Roses of Blood on Barbwire Vines 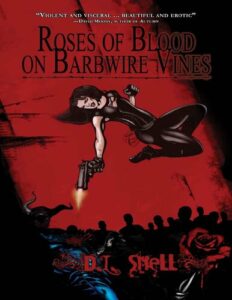 Zombies have devoured mankind. And the few survivors would be better off dead because a clan of vampires, bloodthirsty and vicious, have captured the remnants of humanity for livestock. The vampires breed lobotomized amputees in an apartment building barricaded with wrecked cars, concrete rubble, and snarls of barbwire. Ann, the secret blood slave of the maternity doctor, has evaded this fate, yet her sister Ellie has not. Though she longs to escape, Ann cannot abandon her sibling and unborn niece. But she may have to if she wants to survive. The living dead have found a weak spot in the barricade and are quickly invading the building. Shade, the vampire monarch, defends her kingdom, while Frost, Shade’s general, plans to migrate to an island where they can breed and hunt humans. In their path stands a legion of corpses, just now evolving into something far more lethal, something with tentacles–and that’s just the beginning.