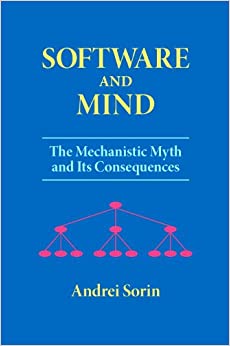 Some of the consequences of the mechanistic software myth

• The software elites have turned software into a weapon, a means to dominate and control society.

• We depend more and more on the type of software that demands only trivial skills, so we are prevented from using our minds and expanding our knowledge.

• The software elites are inducing dependence on inferior, standard systems, and are preventing independent, responsible programming.

• New software products are installed every year in millions of places without being used, presumably because they are not the “solutions” they were said to be.

• Software products and innovations are advertised by describing a few successes, which is logically equivalent to lying.

• Less than 1 percent of the programming activities in society represent useful work – work benefiting society in the way the work of doctors does.

• Many software companies exploit the ignorance of programmers and users by suggesting that their products possess supernatural powers.

• Programmers rely on worthless theories, development environments, and ready-made pieces of software, instead of programming and improving their skills.

• Major government projects are abandoned after spending vast amounts of public money, while the incompetents responsible for these failures continue to be seen as software experts.

• Corporations cannot keep their software applications up to date and must acquire or develop new ones over and over.

• Society must support a growing software bureaucracy – more and more workers are changing from individuals who perform useful tasks to individuals who merely practise the mechanistic software myth.

• The concept of expertise is being degraded to mean, not the utmost that human minds can attain, but simply acquaintance with the latest software systems.

• Our software culture is so corrupt that it has become, in effect, a form of totalitarianism.

The mechanistic myth is the belief that everything can be described as a neat hierarchical structure of things within things. And few of us realize that our entire culture is now based on this fallacy. While the world consists of complex, interacting structures, we prefer to treat every phenomenon as a simple, isolated structure.

Through our software pursuits, the mechanistic myth has spread beyond its academic origins and is affecting every aspect of human existence. In just one generation, it has expanded from worthless theories of mind and society (behaviourism, structuralism, universal grammar, etc.) to worthless concepts in the field of programming (structured programming, object-oriented programming, the relational database model, etc.) to worthless software-related activities that we all have to perform.

The scientific method of mechanism, by which the study of all things is broken down to their smallest building blocks and reassembled in hierarchical order, is the intellectual crowbar that tore down the religion-based myths that dominated thought before the Renaissance. Veteran programmer and computer scientist Andrei Sorin argues that mechanism has outlived its usefulness. Worse, it has become the new mythology, one as vigorously defended by today’s academic and technological elite as the papacy and the Inquisition protected the belief system of the Middle Ages.

As the jacket attests, Sorin has the credentials that demand respect when he talks about his field of expertise and the world in which he works. While his weighty, 944-page tome, Software and Mind, is at first look overwhelming and intimidating, the arguments and observations put forth in the massive work are surprisingly, and thankfully, understandable and approachable. There is a great deal of repetition, which the author freely admits is intentional, but that repetition is necessary if a reader without his background is to comprehend his thesis.

That thesis is a damning one. It accuses academic and “software elites” (many of whom he names) of imposing an Orwellian totalitarianism on not only the scientific computer software community, but also upon those who use its products. Sorin, like the great thinkers of the Renaissance and the Age of Enlightenment, seeks to break free of these artificial restraints, which he believes “attempt to reduce real-world problems to neat hierarchical structures of data, operations and features.”

Software and Mind is not a light or easy read, although Sorin works diligently to present his theories in a logical progression and in a language and style that does not require a reader to have an advanced degree to follow, understand, or digest. Engineers are often derided for their inability to communicate ideas in ways the layman can grasp. If that is a rule, Sorin is the exception.

Each of eight chapters is broken into sections, subsections, and what he calls “numbered parts.” Seven are self-contained journeys of exploration into such topics as “Language and Software,” “Pseudoscience,” and “From Mechanism to Totalitarianism.” One, however, is a book unto itself.

At more than 320 pages, Chapter Seven represents not only a physical third of the book, but also its theoretical core. Each of its three main sections are further subdivided into nine or ten subsections, and it is here that Sorin takes on what he sees as the true nemesis of freedom-loving software scientists everywhere: structured programming, object-oriented programming, and the relational database model. He derides these theories, once hailed as revolutionary, as not only “pseudoscience” but also as the equivalent of “totalitarianism.”

Sorin’s indictment of his profession is sure to stir up controversy and may come as a big surprise to many of his colleagues, let alone to the general public, which has come to revere software creators as something akin to the gods of old. Then again, false gods have fallen before, and Sorin, if he is indeed correct, may just be the scientist who cracks the mythological foundation upon which he claims the modern deities of the computer age stand.

Software and Mind: The Mechanistic Myth and Its Consequences

The Mind (78 pages, 549 KB)
This chapter shows why the mechanistic models promoted by the software elites cannot attain the intelligence, creativity, skills, and intuition of human beings.

Pseudoscience (114 pages, 815 KB)
This chapter discusses the concept of pseudoscience, the principles of demarcation between science and pseudoscience developed by Karl Popper, and the value of these principles in studying the pseudoscientific nature of our mechanistic culture.

Language and Software (88 pages, 711 KB)
This chapter shows that language and software are non-mechanistic phenomena, are based on similar principles, and fulfil a similar role in society.

Language as Weapon (58 pages, 423 KB)
This chapter explains how language is used to deceive and to manipulate people by restricting them to mechanistic thinking.

Software as Weapon (102 pages, 707 KB)
This chapter explains how the mechanistic fallacies lead to software delusions, and how the software elites use these delusions to exploit society.

Software Engineering (344 pages, 2,734 KB)
This chapter analyzes the mechanistic fallacies inherent in the idea of software engineering, and exposes the pseudoscientific nature of the mechanistic programming theories.

From Mechanism to Totalitarianism (76 pages, 545 KB)
This chapter examines the totalitarian tendencies of the mechanistic philosophy, and particularly their manifestation in our mechanistic software culture.

Indez (68 pages, 604 KB)
The index has three levels and detailed descriptions, and functions also as an alphabetical summary of the book’s contents.