Home Tags A history of the sikhs 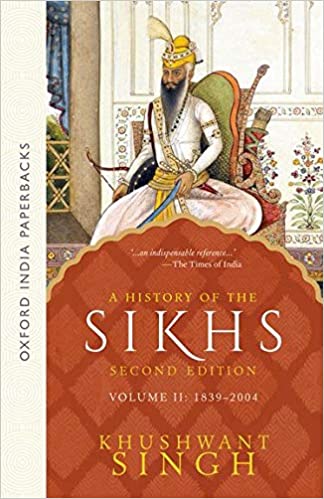 A History of the Sikhs By Khushwant Singh

First published in 1963, this remains the most comprehensive and authoritative book on the Sikhs. The new edition updated to the present recounts the return of the community to the mainstream of national life. Written in Khushwant Singh’s trademark style to be accessible to a general, non-scholarly audience, the book is based on scholarly archival research.Volume 1: 1469-1839: This volume covers the social, religious and political background which led to the formation of the Sikh faith in the fifteenth century. Basing his account on original documents in Persian, Gurmukhi and English, the author traces the growth of Sikhism and tells of the compilation of its sacred scriptures in the Granth Sahib. The transformation of the Sikhs from a pacifist sect to a militant group called the Khasla led by Guru Gobind Singh is portrayed in detail, as is the relationship of the Sikhs with the Mughals and the Afghans, until the consolidation of Sikh power under Maharaja Ranjit Singh. Volume 2 takes up the thread at the death of Maharaja Ranjit Singh in 1839, focusing on the continuing Sikh struggle for survival as a separate community. The author chronicles the years following Indian independence, marked by the demand for a distinct Sikh state, and presents the events leading up to, and following, “Operation Blue Star,” when the Indian army entered the Golden Temple. The new edition includes an epilogue that analyzes events following the end of terrorism in Punjab and the achievement of the community’s aspirations–never more visible than in the elevation of a Sikh to the country’s highest political office.