Home Tags A night to remember by walter lord 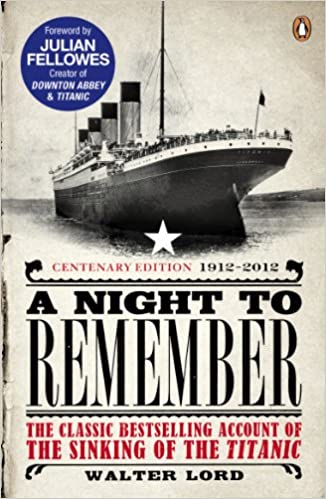 A Night to Remember By Walter Lord

A Night to Remember is a 1955 non-fiction history book by Walter Lord that depicts the sinking of the RMS Titanic on 15 April 1912. The book was hugely successful, and is still considered a definitive resource about the Titanic.

James Cameron’s 1997 Titanic movie is a smash hit, but Walter Lord’s 1955 classic remains in some ways unsurpassed. Lord interviewed scores of Titanic passengers, fashioning a gripping you-are-there account of the ship’s sinking that you can read in half the time it takes to see the film. The book boasts many perfect movie moments not found in Cameron’s film. When the ship hits the berg, passengers see “tiny splinters of ice in the air, fine as dust, that give off myriads of bright colors whenever caught in the glow of the deck lights.” Survivors saw dawn reflected off other icebergs in a rainbow of shades, depending on their angle toward the sun: pink, mauve, white, deep blue–a landscape so eerie, a little boy tells his mom, “Oh, Muddie, look at the beautiful North Pole with no Santa Claus on it.”

A Titanic funnel falls, almost hitting a lifeboat–and consequently washing it 30 yards away from the wreck, saving all lives aboard. One man calmly rides the vertical boat down as it sinks, steps into the sea, and doesn’t even get his head wet while waiting to be successfully rescued. On one side of the boat, almost no males are permitted in the lifeboats; on the other, even a male Pekingese dog gets a seat. Lord includes a crucial, tragically ironic drama Cameron couldn’t fit into the film: the failure of the nearby ship Californian to save all those aboard the sinking vessel because distress lights were misread as random flickering and the telegraph was an early wind-up model that no one wound.

A Night to Remember: The Classic Bestselling Account of the Sinking of the Titanic PDF

A Night to Remember By Walter Lord PDF