Bioassays of Entomopathogenic Microbes and Nematodes by A. Navon and K.R.S. Ascher :: Since World War II, pest control methods have been dominated by the use of synthetic chemical insecticides. These insecticides have been very successful in the marketplace and have contributed greatly to the production of food and fibre, as well as to the control of many diseases of medical and veterinary importance transmitted by insects, especially mosquitoes and blackflies. Despite these benefits, the use of chemical insecticides has not been without problems. Among the most important of these are the development of high levels of resistance in target pest and vector populations, high mortality rates in non-target beneficial insect, mite and spider populations, and contamination of the environment, particularly water supplies, with chemicals that the public perceives as being harmful. Due to these problems, scientists in academia, government and industry have placed a great deal of effort over the past few decades in developing more environmentally compatible pest control products and methods. The best of these include safer chemical insecticides, microbial insecticides based on pathogens that cause disease in insects, parasitic nematodes, and during the last decade, insect-resistant transgenic plants based primarily on insecticidal proteins produced by Bacillus thuringiensis. 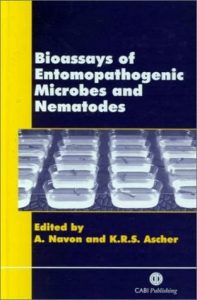 Bioassays of Entomopathogenic Microbes and Nematodes by A. Navon and K.R.S. Ascher