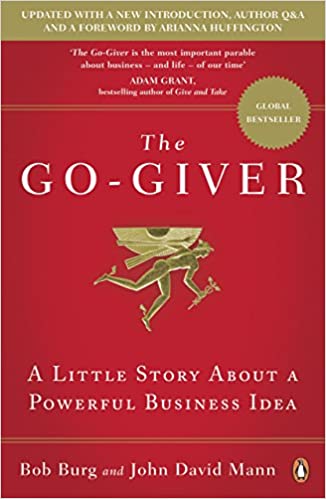 The Go-Giver By Bob Burg and John D. Mann

The Go-Giver: A Little Story About a Powerful Business Idea is a business book written by Bob Burg and John D. Mann. It is a story about the power of giving. The first edition was published on December 27, 2007 by Portfolio Hardcover.

The Go-Giver tells the story of an ambitious young man named Joe who yearns for success. Joe is a true go-getter, though sometimes he feels as if the harder and faster he works, the further away his goals seem to be.

One day, desperate to land a key sale at the end of a bad quarter, he seeks advice from the enigmatic Pindar, a legendary consultant referred to by many devotees simply as the Chairman. Over the next week, Pindar introduces Joe to a series of successful ‘go-givers’ who teach him how to open himself up to the power of giving.

Joe learns that changing his focus from getting to giving – putting others’ interests first and continually adding value to their lives – ultimately leads to unexpected results.