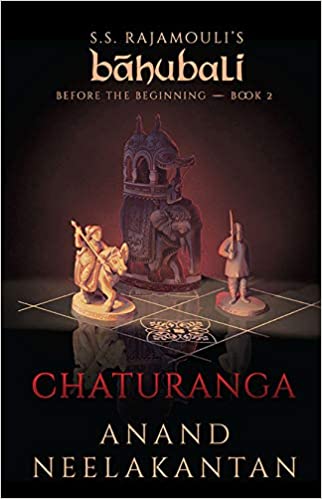 Chaturanga: Baahubali Before the Beginning By Anand Neelakantan

Chaturanga: Baahubali Before the Beginning Book 2 is an Indian historical fiction novel written by Anand Neelakantan. It acts as a prequel to the film Baahubali: The Beginning and sequel to the book The Rise of Sivagami. It was originally released in English on 6 August 2020, Hindi, Tamil and Telugu versions are scheduled to release.

Political intrigue is astir in the land of Mahishmathi. After the failed coup staged by the Vaithalikas, Sivagami finds herself elevated to the position of bhoomipathi, from where she can more ably pursue her burning goal to avenge her father’s death. Meanwhile, there is a tussle between the two sons of the maharaja of Mahishmathi for the crown. And behind the scenes, a wily, skilled player of the political game moves the pieces to topple the king, Somadeva.

Will the maharaja usually able to match wits with the best of them prevail? Or will one of his many enemies finally be able to best him at this game of Chaturanga?

Set against a backdrop of ambition, love, loyalty, passion and greed, the second book in the Bāhubali: Before the Beginning series is a twist-a-minute page-turner riveting and deeply satisfying.