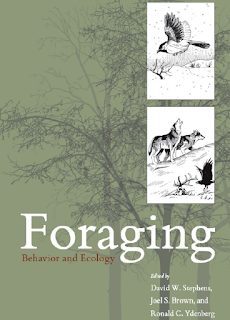 Foraging is fundamental to animal survival and reproduction, yet it is much more than a simple matter of finding food; it is a biological imperative. Animals must find and consume resources to succeed, and they make extraordinary efforts to do so. For instance, pythons rarely eat, but when they do, their meals are large—as much as 60 percent larger than their own bodies. The snake’s digestive system is normally dormant, but during digestion metabolic rates can increase fortyfold. A python digesting quietly on the forest floor has the metabolic rate of thoroughbred in a dead heat. This and related foraging processes have broad applications in ecology, cognitive science, anthropology, and conservation biology—and they can be further extrapolated in economics, neurobiology, and computer science.
Foraging is the first comprehensive review of the topic in more than twenty years. A monumental undertaking, this volume brings together twenty-two experts from throughout the field to offer the latest on the mechanics of foraging, modern foraging theory, and foraging ecology. The fourteen essays cover all the relevant issues, including cognition, individual behavior, caching behavior, parental behavior, antipredator behavior, social behavior, population and community ecology, herbivory, and conservation. Considering a wide range of taxa, from birds to mammals to amphibians, Foraging will be the definitive guide to the field.