Brain Facts A Primer on the Brain and Nervous System – The Society for Neuroscience :: It sets humans apart from all other species by allowing us to achieve the wonders of walking on the moon and composing masterpieces of literature, art, and music. The human brain — a spongy, three-pound mass of fatty tissue — has been compared to a telephone switchboard and a supercomputer. But the brain is much more complicated than either of these devices, a fact scientists confirm almost daily, with each new discovery. The extent of the brain’s capabilities is unknown, but it is the most complex living structure known in the universe. 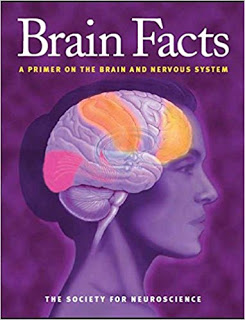 This single organ controls all body activities, ranging from heart rate and sexual function to emotion, learning, and memory. The brain is even thought to influence the immune system’s response to disease and to determine, in part, how well people respond to medical treatments. Ultimately, it shapes our thoughts, hopes, dreams, and imaginations. In short, the brain is what makes us human.
ePUB
Kindle / MOBI

Brain Facts: A Primer on the Brain and Nervous System 6th Edition