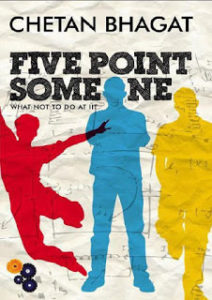 Originally published: 2004
Author: Chetan Bhagat
Adaptations: 3 Idiots (2009)
Publisher: Rupa & Co.
Genres: Fiction
Characters: Raju Rastogi, Ranchoddas Shamaldas Chanchad, Viru Sahastrabudhhe, Farhan Qureshi, Pia V. Sahastrabudhhe
Summary Of The Book
Five Point Someone: What Not To Do At IIT is Chetan Bhagat’s debut novel that presents a dark and humorous perspective on the Indian education system. Set in the premises of IIT, the story revolves around three students who become friends while struggling to keep their place in this highly esteemed institute.The book doesn’t tell you the ways to get into IIT or to survive it but it tells you how bad things can be if one doesn’t think straight.

The book talks about the monotony of the education system even at one of the country’s premier engineering institutes. It takes the reader into the lives of these friends as they toil hard to cope with the strong competition at their college. Hari, Alok, and Ryan enter this institute with a dream to beat the competition and come out successful to become the few chosen ones. However, their life becomes a chaos as they mess up their grades that too big time, Hari falls in love with Prof Cherian’s daughter, and Alok and Ryan just cannot control bickering with each other.

Narrated in first person mostly by Hari, Five Point Someone: What Not To Do At IIT is a dark, funny book that has struck a chord in the hearts of millions of readers across the nation as it sheds some light on the dull and tough academic life in the Indian education system. The protagonists have to deal with tough teachers, with the unending exams, and the difficult academic schedule.

How will these three friends manage to complete their graduation in ruthless world of IIT? Will they manage to survive? Or will they be the victims of failure at the hands of mind-numbing education system? Bhagat reveals that in this funny yet realistic novel.

Five Point Someone: What Not To Do At IIT has been adapted into movies in Hindi as well as Tamil. 3 Idiots, the Hindi adaptation, has been a huge success. The book has won Bhagat several awards like Indo-American Society’s Society Young Achiever’s Award and The Publisher’s Recognition Award. It has remained on the bestseller list since its launch in 2004.