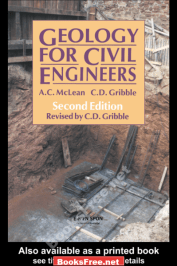 Geology for Civil Engineers by McLean and Gribble

Adam McLean and I have been requested by Roger Jones of Allen & Unwin to think about producing a second version of our Geology for Civil Engineers e-book after the primary version had been printed for just a few years.

Important value determinations of the primary version have been sought, and I’m most grateful to Professor Van Dine and Dr Drummond for their many detailed and useful feedback.

I also needs to notably prefer to thank Dr Invoice French, who identified the place corrections have been required and additionally the place additions (and subtractions) to the textual content may gainfully be made with out altering the unique flavour of our Geology for Civil Engineers e-book.

I’ve integrated most of those useful solutions and hope that the textual content has been improved, however any errors and inaccuracies are mine.

At first of the revision Adam McLean grew to become in poor health, and the sickness obtained progressively worse till, in March 1983, he died.

In reminiscence of all of the enjoyment we had with the primary version, I ought to prefer to dedicate the second version to Adam with my respect.