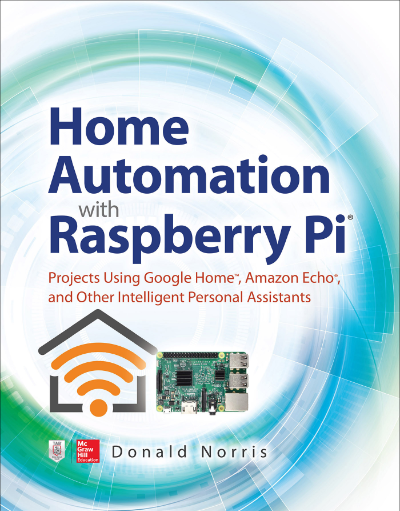 This hands-on guide shows, step by step, how to use the powerful Raspberry Pi for home automation. Written in an easy-to-follow style, the book features DIY projects for Amazon Echo, Google Home, smart lightbulbs and thermostats, and more. Home Automation with Raspberry Pi: Projects Using Google Home, Amazon Echo, and Other Intelligent Personal Assistants lays out essential skills for hobbyists and makers of all ages and experience levels. You will discover how to build gadgets that can work in conjunction with―or in some cases replace―commercially available smart home products.

This Book Is All About How You, as a maker, can help automate your home or business to both improve the quality of your life and coincidentally achieve some efficiencies.

The latter may be actual energy savings or maybe simply improving the everyday flow of personal activities.

I also included using the Raspberry Pi as a principal controller in most of this book’s projects because it so inexpensive yet provides amazing capabilities and functionalities when implementing home automation (HA) solutions.

I have written about HA projects in several of my earlier maker books, which also included the Raspberry Pi as the main controller.

However, in this book, I have included some rather extensive discussions regarding personal voice assistants and their role in HA projects.

This type of device is fairly new to the marketplace and includes the rather well¬known Amazon Echo and Google Home devices.

The inclusion of these devices in this book was predicated on my realization that they are rapidly becoming the consumer’s favorite choice when interacting with HA systems.

The days of turning a thermostat dial or flipping a light switch are rapidly declining given the ubiquitous nature of these new voice¬activation devices.

I try to explain how you can successfully interface with both device types, while at the same time I point out the pros and cons of the two approaches.

I am confident that if you successfully follow my multiple demonstrations, you will become quite adept at interfacing with either device class.

Chapter 5, which follows all the material on voice¬activation devices, concerns HA operating systems, which are an extremely useful adjunct in the implementation of a workable HA system.

I provide a good survey of all the major, currently available HA operating systems (OSs), but such surveys are highly volatile, and there will likely be significant changes by the time this book is published.

Nonetheless, the fundamentals y History Topics Learning Paths Offers & Deals Highlights Settings Support Sign Out of a good HA OS are unchanging, and, hopefully, my discussion in this area will provide you with some good guidance regarding the selection of an appropriate OS that meets your requirements.

Chapter 5 also includes a working demonstration of one of the most popular HA OSs, which should help you really understand how this software functions and let you make a good decision on whether or not to pursue this option as an HA solution.

Chapter 6 describes a Z¬Wave¬enabled HA system. Z¬Wave is a very popular way to create communications links among separate or distributed HA components. There are quite a few Z¬Wave¬compliant device manufacturers in business offering many different and varied Z-Wave¬enabled components.

I feel that it is important for you to be aware of this particular communications protocol because of its impressive popularity and many readily available devices and components. I also provide a chapter demonstration in which I interface a Raspberry Pi directly into a Z¬Wave system.

This allows you to create your own custom control scripts for many different Z¬Wave devices. An open¬source alternative to the Amazon Echo and Google Home devices is the topic of Chapter 7. The open¬source device I discuss is named Microsoft, and it is a Raspberry Pi–a hosted variant on a parent device named Mycroft.

Basically, Mycroft and Microsoft are synonymous: Mycroft is an actual open¬source device, which can be purchased, and Microsoft is the software image loaded onto a Raspberry Pi.

In reality, the Mycroft device contains a Raspberry Pi running precisely the same software as that contained in the Microsoft image. Given this fact, I constantly interchange the names Mycroft and Microsoft in the chapter without a loss of understanding or context.

My purpose in discussing Mycroft is to present you with a lower¬cost option to the Amazon and Google devices. However, the cost difference is really quite marginal when considering that you will need both an external USB microphone and speaker/amplifier to make up a working Microsoft system.

If you add all these extra costs to the cost of a Raspberry Pi, you will likely pay about the same as you would if you purchased an Amazon Echo Dot or a Google Home Mini.

However, if the maker in you is up to the task, it is always fun to build your very own open¬source voice assistant. A trip into the artificial intelligence (AI) realm is the subject of Chapter 8.

There I cover the principles that govern how AI fuzzy logic (FL) may be applied to a home heating, ventilation, and air¬conditioning (HVAC) system.

I discuss in great detail how to use a multistep procedure to design a workable FL system. The good news is that no additional or expensive components are required for a Raspberry Pi-powered HVAC FL controller.

The only requirement is to create and load the FL code into the Raspberry Pi. There is an actual FL demonstration that simulates how a real HVAC  system would function. I use light¬emitting diodes (LEDs) to indicate when appropriate heating and/or cooling commands are generated.

Chapter 9 is a kind of a catch¬all where I cover how to use a variety of sensors seen commonly in several different HA systems, including HVAC and security¬type systems.

This chapter provides reasonable insights into what to consider when selecting a sensor and how to design appropriate interfaces between the sensors and the controller (which, of course, in this chapter is a Raspberry Pi).

I use a very nice wireless data link system named XBee, which provides the capability of sending not only a binary on/off signal but also actual sensor data values if needed.

The XBee subsystem is controlled by an Arduino Uno microcontroller, which provides me with an opportunity to introduce the coprocessor concept into our discussion of HA system design. Sometimes a Raspberry Pi cannot “do it all” and needs some assistance.

Timing is a very important feature for any communications link. However, the Linux OS running on a Raspberry Pi is asynchronous, meaning that there is no guarantee that the computer will be available to process incoming communications data. Meanwhile, the Uno does provide the immediate and continuous attention required by the communications link.

Chapter 11 is a brief one in which I discuss some important ideas on how to integrate separate HA systems so that the user has a “unified” view of an overall HA system and how to provide one-stop control.

I also discuss how scripts or macros executed on an HA controller can significantly improve the overall HA user experience.