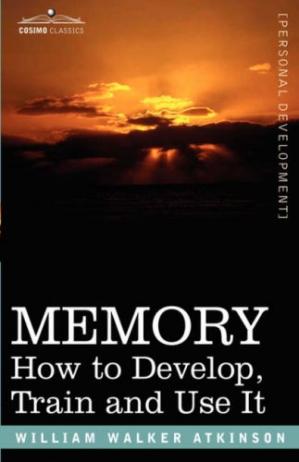 MEMORY: How to Develop, Train and Use It By William Walker Atkinson

Memory: How to Develop, Train and Use It. Subconscious and the Superconscious Planes of Mind.

New Thought proponents at the turn of the 20th century sought to use mysticism to unleash the forces of the universe in themselves. One of the most influential thinkers of this early “New Age” philosophy promises here, in this 1913 book, to show the reader how to cultivate the memory in such a way as to improve one’s entire life.

“All knowledge is but remembrance.” every day of our lives, copious amounts of information is thrown at us. From Remembering small details crucial to our day-to-day activities to memorizing data imperative for success in our professional lives, we rely on the efficiency of our mental faculties endlessly. But it is not as efficient as we want it to be, at times.

Atkinson’s method is not geared to mere recollection of facts: it encourages a holistically “correct seeing, thinking, and remembering.” With secrets hidden for almost a century, this book will teach you to train the eye as well as the ear to improve your ability to recall names, faces, numbers, music, facts, and much more. American writer WILLIAM WALKER ATKINSON (1862-1932) was born in Baltimore and had built up a successful law practice in Pennsylvania before professional burnout led him to the religious New Thought movement. He served as editor of the popular magazine New Thought from 1901 to 1905, and as editor of the journal Advanced Thought from 1916 to 1919. He authored dozens of New Thought books-including The Philosophies and Religions of India, Arcane Formula or Mental Alchemy and Vril, or Vital Magnetism-under numerous pseudonyms, some of which are likely still unknown today.

MEMORY: How to Develop, Train and Use It PDF