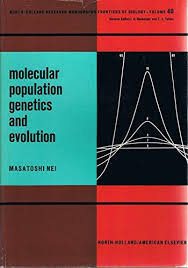 A non‐neutral evolution of terminology has occurred here. The “balanced” viewpoint named by Dobzhansky has now somehow become the “classical” viewpoint, and Dobzhansky’s “classical” viewpoint has become, with the addition of numerous neutral mutations, the “neutralist” viewpoint. Despite this ideological end run, Nei’s book makes it abundantly clear that the neutralist viewpoint is still the old classical one.