Home Tags Nematodes as biocontrol agents pdf
Nematodes as Biocontrol Agents by Parwinder, Ralf- Udo and David I. Shapiro :: The interest in the use of nematodes as biological pest control agents has increased exponentially over the past two decades. Thousands of researchers and practitioners worldwide are now exploring the potential of nematodes to manage noxious insects, molluscs, plant nematodes and even soilborne plant pathogens. The entomopathogenic nematodes (EPNs) (Steinernema and Heterorhabditis) and slug-parasitic nematodes (Phasmarhabditis) have proven particularly successful and are now commercially mass-produced in six of the seven continents to treat pest problems in agriculture, horticulture and veterinary and human husbandry. The ease of mass production and exemption from registration requirements are the two major reasons for early interest in the commercial developments of nematodes. However, demonstrations of practical use, particularly in Europe and North America and subsequently in Japan, China and Australia, spurred developments across the world that have led to the availability of nematodes against pests that were once thought impossible to control.
In this volume 54 experts from 18 countries contribute authoritative chapters that comprehensively illustrate the remarkable developments in the use of nematodes for biocontrol of a diverse array of pests in diverse ecosystems. This volume captures the full breadth of basic and applied information on all groups of nematodes that are used or have potential as biocontrol agents of pest invertebrates and soil-borne plant pathogens. The actual application of nematodes in different cropping systems of the world is described and the huge amount of recent efficacy data on numerous target pests is summarized. We have attempted to integrate the vast amount of information for the development of novel and practical approaches for nematode application and to explain test failures that frustrated early efforts. EPNs in the families Heterorhabditidae and Steinernematidae are by far the most widely tested group. Due to a mutualistic association with bacteria in the genera Photorhabdus (for Heterorhabditidae) and Xenorhabdus (for Steinernematidae), EPNs are able to kill a diverse array of insects. 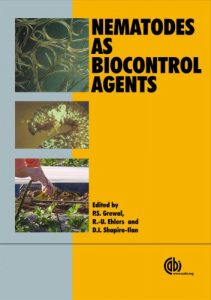 Nematodes as Biocontrol Agents by Parwinder, Ralf- Udo and David I. Shapiro