Home A Special Books The Ādi-Granth, Or: The Holy Scriptures of the Sikhs 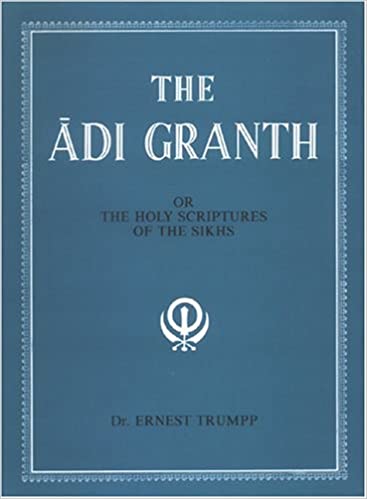 The Ādi-Granth, Or: The Holy Scriptures of the Sikhs is the first holy religion book of sikh religion also called the “Guru Granth Sahib” is edited by Ernest Trumpp, published in 1877.

The Adi Granth is the most sacred book of the Sikhs. Literally meaning the ‘First Book,’ it is also reverentially called the Granth Sahib and is regarded as the authoritative scriptural work. The compilation of the Adi Granth was done by the fifth Sikh guru, Arjan, in AD 1603 and contains, besides his own writings, the compositions of the four predecessors, the gurus, Nanak, Angad, Amardas and Ramdas. Subsequently, in AD 1705-6, additions were made to the Adi Granth by the tenth and the last guru, Godind Singh, who incorporated the hymns of the ninth guru, Teg Bahadur and enjoined that after him the Granth Sahib would take the place of the guru. In its final form, the Adi Granth contains the writings of the Sikh gurus, and also the banis of thirty-six Hindu and Muslim saints who lived between the twelfth and the seventeenth centuries. It is needless to emphasize the importance of this great religious work which sets forth the ideal of the union of the human Soul with its Maker. This can be attained by following, scrupulously the highest ethical standards and abjuring egoism without, however, renouncing the worldly activities. Besides its great religious importance, the Adi Granth is an invaluable work from the standpoint of the historian and the linguist. It provides very useful data about the social and religious conditions of India during early and late medieval times. For those interested in the development of the northern Indian languages and dialects, the Adi Granth is a veritable storehouse of information. Though the language of the Adi Granth is mainly Punjabi, Hindi and the cognate dialects, it is interspersed with Sanskrit, Marathi, Persian and Arabic words. It thus throws considerable light on the problem of the ancient Prakrts and Apabhramsa and shows how the vernacular languages of northern India evolved out of them.

Related Results : The Ādi-Granth – The Holy Scriptures of the Sikhs By Ernest Trumpp,