Home A Special Books The Conspiracy at Meru 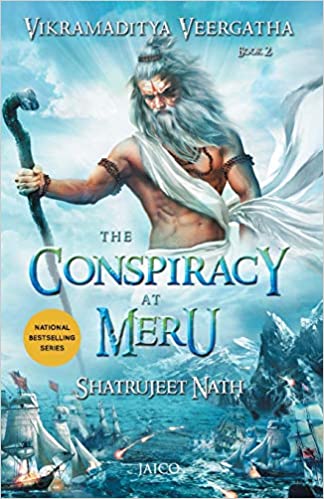 The Conspiracy at Meru By Shatrujeet Nath

Vikramaditya Veergatha Book 2 – The Conspiracy at Meru is ancient indian mythology book of king vikramaditya by Shatrujeet Nath, published in 2016.

Vikramaditya and his Council of Nine have fought valiantly to repel the rampaging hordes from Devaloka and Patala – but Avanti has been brought to its knees. Ujjayini lies battered; its citizens are scared and morale is badly shaken. Meanwhile, the barbaric Hunas and Sakas are gathering on the horizon and cracks are emerging between the allied kingdoms of Sindhuvarta…

The only silver lining is that the deadly Halahala is safe. For now.

Bent on vengeance, Indra is already scheming to destroy Vikramaditya, while Shukracharya has a plan that can spell the doom for the Guardians of the Halahala. How long can the human army hold out against the ferocity and cunning of the devas and asuras? And will Vikramaditya’s love for his queen come in the way of his promise to Shiva?