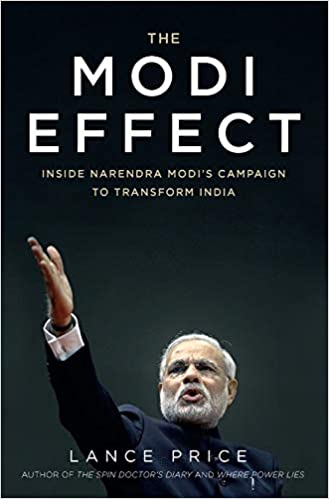 The Modi Effect: Inside Narendra Modi’s Campaign to Transform India By Lance Price

The 2014 elections were the largest elections ever conducted in human history and Narendra Modi happens to win those elections. Considering the claims of him being a ’chaiwallah’, and the transformation to becoming a Prime Minister of India, the book accounts for Modi’s triumph journey to the Prime Minister’s office. The book came just after a year of Narendra Modi’s victory and hence was titled The Modi Effect. The books are based on the conversations between writer, Lance Price and Modi, and the accounts of people who have supported Modi in his journey to PMO. It discusses anything and everything about the ideas, faiths, believes, and opinions of Modi as a leader of BJP. It’s a fascinating analysis of how vast amounts of money function together to achieve a single political target.

How did a ‘chai wallah’ who sold tea on trains as a boy become Prime Minister of India?

On May 16, 2014, Narendra Modi was declared the winner of the largest election ever conducted anywhere in the world, having fought a campaign unlike any before.

Political parties in Britain, Australia and North America pride themselves on the sophistication of their election strategies, but Modi’s campaign was a master-class in modern electioneering. His team created an election machine that broke new ground in the use of social media, the Internet, mobile phones and digital technologies. Modi took part in thousands of public events, but in such a vast country it was impossible to visit every town and village. The solution? A ‘virtual Modi’ – a life-size 3D hologram – beamed to parts he could not reach in person. These pioneering techniques brought millions of young people to the ballot box – the holy grail of election strategists everywhere – as Modi trounced the governing Congress Party led by the Gandhi dynasty.

Former BBC correspondent and Downing Street communications expert Lance Price has been granted exclusive access to Prime Minister Narendra Modi and his team of advisers. With complete freedom to tell it as he finds it, he details Modi’s rise to power, the extraordinary election victory and its aftermath. The Modi Effect: Inside Narendra Modi’s campaign to transform India lifts the lid on a whole new box of tricks, where message-management and IT wizardry combined to create a vote-winning colossus of awesome potency.