The Origin and Evolution of the Solar System by Woolfson 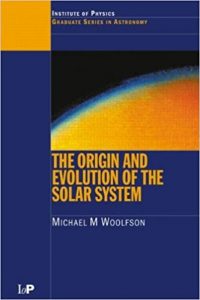 The origin of the solar system has been a matter of speculation for many centuries, and since the time of Newton it has been possible to apply scientific principles to the problem. A succession of theories, starting with that of Pierre Laplace in 1796, has gained general acceptance, only to fall from favor due to its contradiction in some basic scientific principle or new heavenly observation. Modern observations by spacecraft of the solar system, the stars, and extra-solar planetary systems continuously provide new information that may be helpful in finding a plausible theory as well as present new constraints for any such theory to satisfy.

The Origin and Evolution of the Solar System begins by describing historical (pre-1950) theories and illustrating why they became unacceptable. The main part of the book critically examines five extant theories, including the current paradigm, the solar nebula theory, to determine how well they fit with accepted scientific principles and observations. This analysis shows that the solar nebula theory satisfies the principles and observational constraints no better than its predecessors. The capture theory put forward by the author fares better and also indicates an initial scenario leading to a causal series of events that explain all the major features of the solar system

Part 1 The general background: The structure of the solar system. Observations and theories of star formation. What should a theory explain?

Part 2 Setting the theoretical scene: Theories up to 1960.

Part 4 The current state of theories: Comparisons of the main theories. Appendices.