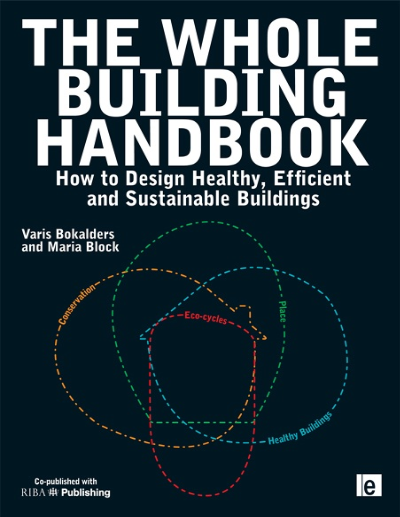 The Whole Building Handbook How to Design

Introduction to The Whole Building Handbook How to Design

There is overwhelming scientific evidence that environmental problems, including climate change, are a serious global threat, demanding an urgent global response.

Many researchers and analysts warn that we have only a few decades in which to achieve sustainable development, to prevent catastrophic environmental changes.

The design and methods of construction of our built environment our homes, workplaces, and cities – have an enormous impact on both the global environment and locally on the communities that inhabit them.

Creating a sustainable built environment is, therefore, a crucial part of the transformation needed to achieve true sustainability.

Human activities and the technologies we use can cause many problems. Our extensive use of fossil fuels and hazardous chemicals pollute the atmosphere, water, and soil – the essential commodities for our survival.

Burning of fossil fuels discharges carbon oxides (COx ), sulfur oxides (SOx ), and nitrogen oxides (NOx ), which affect the climate and the ozone layer and contribute to the acidification of soil and water.

Many current human activities, including the burning of fossil fuels and massive deforestation, cause increased CO2 and other ‘greenhouse gas’ levels in the atmosphere.

This creates the enhanced greenhouse effect, heating up the average global temperature and causing climate change. Calculations show that a temperature increase of 1.6–6°C is possible, which would lead to a 15– 100cm rise in ocean water levels.

There will be a shift in climatic zones over a large part of the Earth. Extreme weather conditions such as storms, floods, and drought will become more common.

He reported that the stabilization of CO2 levels requires that annual emissions be brought down to at least 80 percent below current levels.

The cost of an action was estimated to be limited to around 1 percent of global GDP each year if adequate action were to be taken immediately. Since then, Stern has revised this up to 2 percent of GDP because global warming is happening faster than previously predicted.

If no action is taken, the cost could be between 5 and 20 percent of GDP each year, now and forever. And it will be difficult or impossible to reverse the changes.

Population growth and our over-exploitation of resources also cause massive problems. It is currently believed that oil reserves will last for 30 years, natural gas reserves for 70 years, and coal reserves for 250 to 300 years.

Freshwater is scarce and unequally distributed, groundwater reserves are being used up, and water is being polluted so that it is undrinkable, meaning that water management will very soon be one of the world’s greatest problems.

Arable land is a limited resource: fertile topsoil is being lost because of erosion and agricultural land is being destroyed by salinization, waterlogging, and the building of cities on arable land. The seas and oceans are heavily over-fished; without a decrease of current fishing, many fish stocks will disappear.

Considerable deforestation is taking place in many parts of the world, especially in the tropical rainforests. Biological and genetic depletion is increasing both on land and in the water. Cheap fossil fuels have made possible a growth in population that is without historical precedent.

The 1987 Brundtland Commission’s report, Our Common Future, at the request of the United Nations, established an ethical principle that should be self-evident: ‘We must satisfy our generation’s needs without destroying the opportunities for future generations to satisfy their needs.’

It is thus a question of ecological, economic, and social sustainability. Human survival and human welfare may depend on our success in transforming principles of sustainable development into a global ethic: ‘thinking globally and acting locally’.

Conventional economic practices take no account of vital natural assets that have no monetary price, such as clean air, clean water, nature, etc.

A country’s wealth and well-being are typically judged by its GNP. A re-evaluation of the GNP concept, where negative environmental effects are included as minus amounts in a country’s welfare – a green GNP – would be a better measure of national economic development.

In Balance with Nature

Planning a sustainable society requires a holistic approach in which we learn from and cooperate with nature.

Our planet and its ecosystems are a complex whole where plants, animals, people, and micro-organisms all form an integral part: everything is connected to everything else, nothing disappears, everything must go somewhere.

A very large proportion of the energy used in the world, and the greenhouse gases that are released from this energy use, is connected to the building sector.

It is clear that no move towards sustainable development can go ahead without radical changes in architecture, construction, and spatial planning.

We are now seeing a huge drive to conserve energy, increase efficiency, and create zero-carbon buildings, all of which are vital in reducing the environmental impacts of buildings.

But building sustainably must also take a broader approach, including the whole impact of a building – on the environment, people’s health, and social well-being throughout its whole lifetime.

The Whole Building Handbook: How to Design Healthy, Efficient and Sustainable Buildings PDF