Home A Special Books The Wrath of the Hellfires 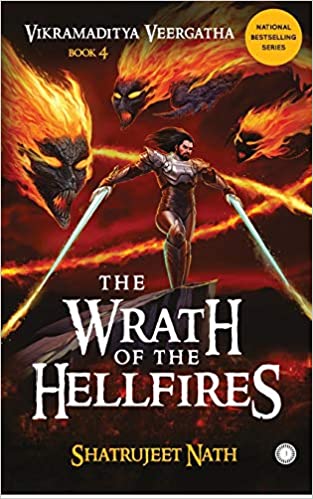 The Wrath of the Hellfires By Shatrujeet Nath

Vikramaditya Veergatha Book 4 – The Wrath of the Hellfires is ancient indian mythology book of king vikramaditya by Shatrujeet Nath, published in 2020.

Patience is a drawn bow. Rage, its relentless arrow. Shukracharya’s plan to break the unity of vikramaditya’s Council has borne bitter fruit. Friends have become sworn enemies, and brother has turned against brother, setting avanti on the path to self-destruction. Even as Vikramaditya prepares to counter a hunk invasion, a rebellion brews within ujjayini, while a devious conspiracy is hatched to humiliate him. With indra’s spies swarming the palace and Shukracharya making a bold bid to take the Halahala, the king is dangerously close to the brink of defeat. Alone and abandoned by those dear to him, fighting to protect his people, trying his best to keep his promise to Shiva, will the SA Mr at rise one last time to defend his love, his city and his honour? As the asura and Deva forces muster in a final, desperate gamble to claim the Halahala, the wrath of the hellfire brings an explosive conclusion to vikramaditya’s epic tale of action and adventure.