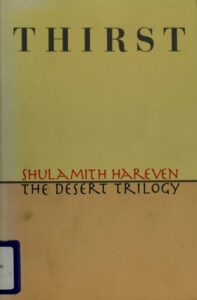 Israeli novelist and activist Shulamith Hareven’s masterpiece, Thirst: The Desert Trilogy, contains three of her most significant works: The Miracle Hater, Prophet, and After Childhood. In these beautifully written novellas, Hareven recasts the biblical journey from the exodus to the Land of Israel in a terrifically imagined contemporary voice. Hareven’s spare and spacious prose howls with the grandeur of the desert wilderness and the mythic beginnings of her nation and her people. Enlarging one of the world’s most dramatic and beloved stories, Hareven shifts our focus from the typical heroes—the great and mighty men of history—to the margins: a disillusioned shepherd who loses faith in his leaders, a would-be prophet from a distant city whose fate becomes entwined with the Israelites; an unhappy couple living at the very edge of civilization.

Hareven, whom the French weekly L’Express listed among the “100 women who move the world,” was the author of nineteen books and was the first (and for twelve years, the only) female member of the Academy of the Hebrew Language. As a journalist, she covered two wars and wrote seminal articles on the plight of Palestinians. She became a prominent spokesperson for Israel’s Peace Now movement. Shimon Peres, former president of Israel, called Thirst “both timeless and timely.” Now available for the first time as an eBook, Thirst explores with subtlety and depth how individuals learn to relate to nature, to society, and especially to the divine.