Home General Subjects Books Chemistry Books Organic Chemistry, 8th Edition by Paula Yurkanis Bruice
Organic Chemistry, 8th Edition by Paula Yurkanis Bruice :: Overview: The guiding principle behind this book is to present organic chemistry as an exciting and vitally important science. To counter the impression that the study of organic chemistry consists primarily of memorizing a multitude of facts, I have organized this book around shared features and unifying concepts, while emphasizing principles that can be applied again and again. I want students to apply what they have learned to new settings and to learn how to reason their way to solutions. I also want them to see that organic chemistry is a fascinating discipline that is integral to their daily lives. Preparing Students for Future Study in a Variety of Scientific Disciplines:
This book organizes the functional groups around mechanistic similarities. When students see their first reaction (other than an acid–base reaction), they are told that all organic compounds can be divided into families and that all members of a family react in the same way. And to make things even easier, each family can be put into one of four groups, and all the families in a group react in similar ways. “Organizing What We Know About Organic Chemistry” is a feature based on these statements. It lets students see where they have been and where they are going as they proceed through each of the four groups. It also encourages them to remember the fundamental reason behind the reactions of all organic compounds: electrophiles react with nucleophiles. When students finish studying a particular group, they are given the opportunity to review the group and understand why the families came to be members of that particular group. The four groups are covered in the following order. (However, the book is written to be modular, so they could be covered in any order.)
• Group I: Compounds with carbon-carbon double and triple bonds. These compounds are nucleophiles and, therefore, react with electrophiles undergoing electrophilic addition reactions.
• Group II: Compounds with electron-withdrawing atoms or groups attached to sp3 carbons. These compounds are electrophiles and, therefore, react with nucleophiles—undergoing nucleophilic substitution and elimination reactions.
• Group III: Carbonyl compounds. These compounds are electrophiles and, therefore, react with nucleophiles—undergoing nucleophilic acyl substitution, nucleophilic addition, and nucleophilic addition-elimination reactions. Because of the “acidity” of the a-carbon, a carbonyl compound can become a nucleophile and, therefore, react with electrophiles.
• Group IV: Aromatic compounds. Some aromatic compounds are nucleophiles and, therefore, react with electrophiles—undergoing electrophilic aromatic substitution reactions. Other aromatic compounds are electrophiles and, therefore, react with nucleophiles—undergoing nucleophilic aromatic substitution reactions. 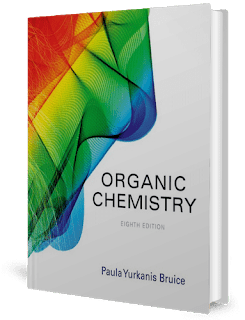