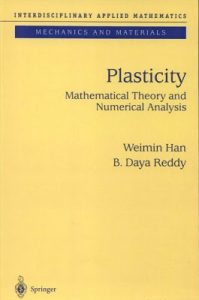 Plasticity Mathematical Theory and Numerical Analysis Book By Weimin Han and  B. Daya Reddy
The basis for the modern theory of elastoplasticity was laid in the nineteenth- century, by Tresca, St. Venant, Levy  ́ , and Bauschinger. Further major advances followed in the early part of this century, the chief contributors during this period being Prandtl, von Mises, and Reuss. This early phase in the history of elastoplasticity was characterized by the introduction and development of the concepts of irreversible behavior, yield criteria, hardening and perfect plasticity, and of rate or incremental constitutive equations for the plastic strain. Greater clarity in the mathematical framework for elastoplasticity theory came with the contributions of Prager, Drucker, and Hill, during the period just after the Second World War. Convexity of yield surfaces, and all its ramifications was a central theme in this phase of the development of the theory.