Home General Subjects Books Chemistry Books Simulating Enzyme Reactivity – Computational Methods in Enzyme Catalysis by Tunon and...
Simulating Enzyme Reactivity – Computational Methods in Enzyme Catalysis by Tunon and Moliner :: The simulation of enzymatic processes is a well-established field within computational chemistry, as demonstrated by the 2013 Nobel Prize in Chemistry, awarded jointly to Martin Karplus, Michael Levitt and Arieh Warshel for the development of multiscale models for complex chemical systems. It is worth mentioning that this recognition by the Nobel Foundation of the capabilities of computational chemistry was preceded by previous awards to Walter Kohn and John Pople, who won the Nobel Prize in 1998 for their work on density functional theory and computational methods in quantum chemistry. The use of models and simulations to understand and predict chemical processes has been attracting increasing attention, especially in recent years due to the development of high-performance computers. Nowadays, computational chemistry has become an essential tool, complementary to other experimental techniques, to study enzyme reactivity due to their potential applications, in particular in complex systems where molecular details can be elusive to experimental approaches. 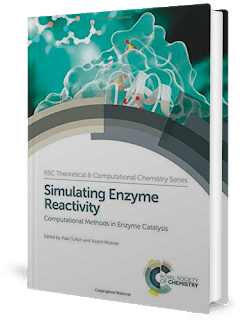