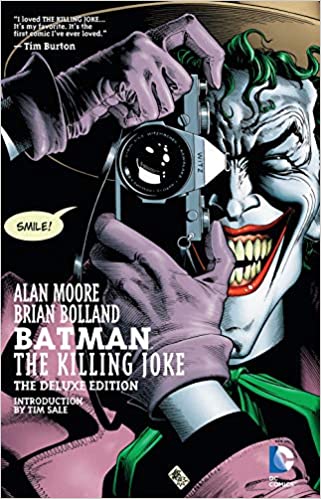 Batman: The Killing Joke is DC Comics one-shot graphic novel featuring the characters Batman and the Joker by Alan Moore, published in 1988.

Launched with stark, THE KILLING JOKE is Alan Moore’s fantastic reflection on the razor-thin line amongst rational sanity and craziness, boldness and villainy, drama and tragedy.

As per the grinning engine of franticness and mayhem known as The Joker, that is all that isolates the normal from the psychotic. Freed once again from the confines of Arkham Asylum, he’s out to demonstrate his deranged point. What’s more, he is going to utilize Gotham City’s top cop, Commissioner Jim Gordon and his splendid and delightful girl Barbara to do it. Presently Batman must race to stop his archnemesis before his rule of fear claims two of the Dark Knight’s dearest companions. Can he at last put a conclusion to the cycle of bloodlust and lunacy that connections these two notorious enemies before it leads its deadly decision? What’s more, as the astonishing starting point of the Clown Prince of Crime is at last uncovered; will the thin line that isolates Batman’s nobility and The Joker’s madness snap for the last time?