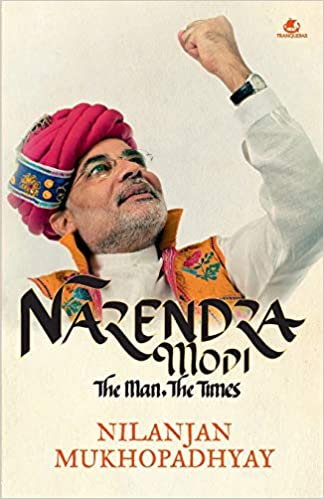 Narendra Modi: The Man, The Times By Nilanjan Mukhopadhyay

Narendra Modi: The Man, The Times is biography book of narendra modi by Nilanjan Mukhopadhyay, published in 2013.

On 26 December 2012, Narendra Modi was sworn in as the Chief Minister of Gujarat for the fourth time to extend his record tenure in office. ‘Mass Murderer’ or ‘Development Man’? It depends on which side of the spectrum he is viewed from, because Narendra Modi is one of those politicians whose name prompts extremes of hate-filled anger or outright adulation. Despite polarizing Gujarat and India in more ways than one, Modi brilliantly does what it takes to survive in a democracy: win elections.

Written by veteran journalist and writer, Nilanjan Mukhopadhyay, after several in-depth interviews, meticulous research and extensive travel through Gujarat, this book reveals hitherto unknown aspects of Narendra Modi’s psyche: as a six year- old boy selling tea to help out his father and distributing badges and raising slogans at the behest of a local political leader, abandoning his family and wife in search of his definition of truth, initiation into the RSS as a fledgling who ran errands for his seniors, his idea of Gujarati pride and Indian-ness and finally, his meteoric rise which gave him a distinct identity post the 2002 Godhra riots. Narendra Modi: The Man, The Times is a definitive biography of a man who may have challenged the basic principles of a sovereign secular nation but emerged as an undisputed and larger-than-life leader.