Young India: AN INTERPRETATION AND A HISTORY OF THE NATIONALIST MOVEMENT FROM WITHIN by Lala Lajpat Rai 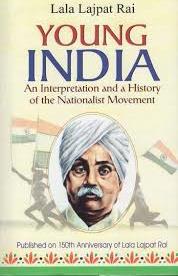 In this book Lala Lajpat Rai describes the political situation of the country as it was in 1915 and a history of freedom struggle before 1915. This book is very helpful in understanding true nature and contribution of different freedom fighters of India.

This work has been selected by scholars as being culturally important, and is part of the knowledge base of civilization as we know it. This work was reproduced from the original artifact, and remains as true to the original work as possible. Therefore, you will see the original copyright references, library stamps (as most of these works have been housed in our most important libraries around the world), and other notations in the work. This work is in the public domain in the United States of America, and possibly other nations. Within the United States, you may freely copy and distribute this work, as no entity (individual or corporate) has a copyright on the body of the work.As a reproduction of a historical artifact, this work may contain missing or blurred pages, poor pictures, errant marks, etc. Scholars believe, and we concur, that this work is important enough to be preserved, reproduced, and made generally available to the public. We appreciate your support of the preservation process, and thank you for being an important part of keeping this knowledge alive and relevant.

THE GENERAL VIEWPOINT OF THE INDIAN NATIONALIST

India Practically Independent up to the Twelfth Century

Muslim Rule in India not Foreign

INDIA UNDER THE BRITISH

Political Disqualification of the Indians

All Europeans, Eurasians including Armenians and Jews can carry arms free of license; not so the Indians

Conflict of French and English in India

How British Rule in India was Established

Methods of Consolidation of British India

Conquest of India Diplomatic, not Military

The Great Indian Mutiny of 1857

How the Mutiny was Put Down

PART II. THE BIRTH OF THE INDIAN NATIONAL CONGRESS

Hume, a Lover of Liberty

Congress to Save British Empire from Danger

The Congress Lacked Essentials of a National Movement

Causes of Failure of the Congress

PART III. THE BIRTH OF THE NEW NATIONALIST MOVEMENT

Men who have Inspired the Movement

The failures of the Congress evolved the Nationalist Movement

The Congress Deputation to England in 1905

Object of the Passive Resistance Movement

THE FIRST YEARS OF THE NATIONALIST MOVEMENT

The Second Move of the Bengalees: The National University

Independence, but not at once

Preparing the Nation for Freedom

Preparatory Work from Below

6. INDIAN NATIONALISM AND THE WORLD-FORCES

Interpretation of India to Western World

THE RELIGIOUS AND THE COMMUNAL ELEMENTS IN INDIAN NATIONALISM

Mohammedan Revulsion of Feeling against the British

Disaffection among the Sikhs

Change in Indian Life and Depth of Nationalism

Nationalism Fertilised by Blood of Martyrs

Wave of Indian Nationalism is on

Illiteracy the Fault of the British and no Bar to Self-government.

Unfitness of Orientals for Representative Institutions.

Nationalism has come to Stay

PERSONNEL OF THE GOVERNMENT

FIGURES ABOUT EDUCATION AND LITERACY

Young India: An Interpretation and a History of the Nationalist Movement from Within PDF